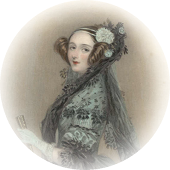 Ada Lovelace, the namesake for Secret Ada, has been called the first computer programmer. Born in 1815, she was a child of the famous English poet Lord Byron. Her mother, who separated with Lord Byron shortly after Ada's birth, vowed not to have anything further to do with poets or poetry, and gave Ada intensive training in mathematics. With this preparation, Ada was fascinated when she saw a demonstration of an early prototype of Charles Babbage's difference engine, a calculating device invented to compute the tables of useful numbers called logarithms.

She began a correspondence with Babbage, who subsequently invented a new machine that he called the Analytical Engine. While the Analytical Engine was never built, Ada learned how it worked; she is said to have understood it better than anyone else other than Babbage himself. When an article about the machine appeared in French, Ada undertook an English translation of the article, and her version turned out to be much longer than the original, since she added additional explanatory material. She also included examples of how the machine could be programmed; these were essentially the first computer programs ever written.

While some historians have pointed out that Babbage probably gave Ada material to start from when writing these example programs, they do agree that Ada's most important insight was entirely her own: While Babbage's interest in his machines was confined to calulating numbers, Ada predicted far grander uses: the manipulation of words, graphics, and even music. Today Ada Lovelace is recognized as an early visionary of the computer era.

For those wishing to learn more about Ada Lovelace and read Ada's letters for themselves, Dr. Betty Toole, Ed.D. has written a fantastic book on Ada Lovelace entitled "Ada: The Enchantress of Numbers."